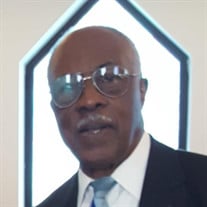 Samuel Cornelius Boyd, Sr. passed away peacefully on March 7, 2021 at the age of 93, in the NC State Veteran&#8217;s Home in Fayetteville, NC. Sam Boyd was a quiet patriot to the end, loved and respected by countless family members and friends,... View Obituary & Service Information

The family of Mr. Samuel Cornelius Boyd created this Life Tributes page to make it easy to share your memories.

Send flowers to the Boyd family.